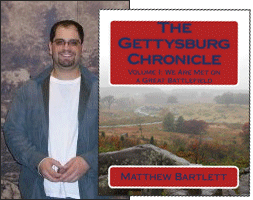 Author and historian Matthew Bartlett will discuss the events of July 1, 1863, the “forgotten” day of the Battle of Gettysburg.

Bartlett will share stories of the first day of battle, including one battle fought by men from Connecticut against Confederate forces in a little talked about part of the battlefield.

Bartlett is a 2013 graduate of the American Military University with a Master’s in Military History with a concentration in Civil War studies. He has written four books about the battle of Gettysburg, called The Gettysburg Chronicle. He is currently working on book five in the series.