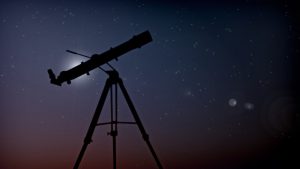 Be sure to look up this month. There are many exciting events going on in the night sky – from blue moons to a launch into space. Scroll further for highlights:

OCTOBER 2020: WHAT’S UP IN THE SKY (with printable star maps):
https://www.beckstromobservatory.com/whats-up-in-tonights-sky-2/ 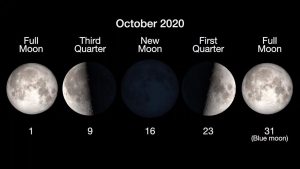 Let’s start off our sky highlights with the moon. The first full moon of the month is officially on October 1st but it will look full for a few days.This is known as the Harvest Moon. It will look large in the early evening sky and it will have an orange tint to it when it’s near the horizon.

Before, electricity farmers would use the light from the harvest moon to help them gather their crops. 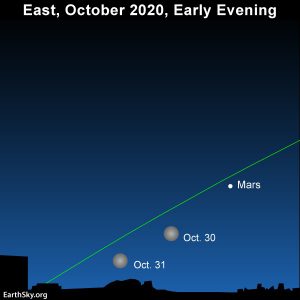 At the end of the month, we’ll have a second full moon. This will occur on Halloween. And that bright red “star” near the moon is no star at all but the planet Mars.

When you have two full moons in one month, it’s known as a blue moon. Blue moons are unusual. In fact, the next one won’t be until August 2023 and the next blue moon on Halloween won’t be until 2039.

The last time we had a blue moon on Halloween was in 1944. So, the phrase “once in a blue moon” definitely is an accurate way to describe a rare occurrence.

The next can’t-miss event this month in the night sky is the planet Mars. The red planet will be at its brightest until 2035. Look for it early in the month, low on the horizon in the east. It will be near the rising Harvest Moon.

Although Mars will be closest to the Earth on Oct 6, astronomers believe the best time to observe Mars is when it is directly across from the Sun from our perspective. This is called opposition  and it will happen on October 13, 7:20pm ET. 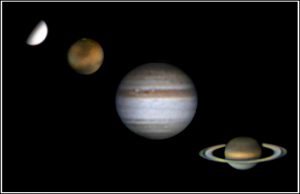 The final stars of October’s sky show are three planets that will be shining brightly.

If you’re an early riser, Venus will be a white brilliant object in the eastern sky early in the month. Look a little before sunrise. The other bright spot in the sky near Venus will be the star Regulus.

Later in the month on the 21st, 22nd and 23rd, Jupiter and Saturn will be in the southern sky in the evenings. The waxing moon will be moving near the planets each evening, making them easy to find.

If you have a good pair of binoculars you should be able to see Saturn’s largest moon, Titan. 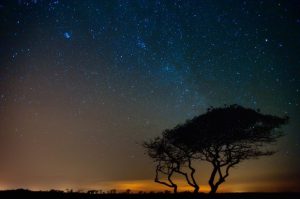 You won’t need an umbrella for this shower. The annual Orionid meteor shower will peak from October 20th to the 24th.

The meteors occur as the Earth moves through the trail of Halley’s Comet. If the sky is clear, the viewing should be excellent as the moon will set early in the evening, making for maximum darkness in the skies.

Though you won’t see this in the night sky, you can watch NASA astronaut Kate Rubins and Russian cosmonauts Sergey Ryzhikov and Sergey Kud-Sverchkov launch into space on October 14 at 12:45 p.m. ET on NASA’s live stream. They’re headed to the International Space Station where they will spend the next six months.

And don’t forget to check-out some of the great astronomy books you can find at the Stratford Library:

Check out the latest info in Teen!
DIY Storytime – Trains
Support Your Library