By Children's Librarian on March 19, 2021 in Children, DIY Storytimes

Enjoy this Do-It-Yourself Storytime on the theme of Space Aliens whenever is convenient for your family.

Aliens Love Underpants
• Written by Claire Freedman
• Illustrated by Ben Cort
• Published by Simon & Schuster
• Presented by Books Alive!
Aliens love underpants, but since there aren’t any in space, they come to Earth to find them.
https://video.link/w/hbZXb
Felt Magnet has directions for making a space alien paper bag puppet and other ideas:
https://feltmagnet.com/crafts/Easy-Alien-Craft-Ideas-for-Kids#gid=ci026dc77b100026e8&pid=easy-alien-craft-ideas-for-kids-MTc1MDE1MjkwMjkwMTIwNDI0 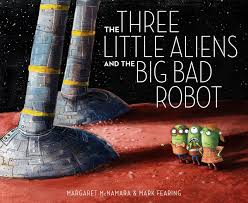 The Three Little Aliens and the Big Bad Robot
• Written by Margaret McNamara
• Illustrated by Mark Fearing
• Published by Schwartz & Wade
• Presented by Reading Rhinos
A space alien version of the Three Little Pigs and the Big Bad Wolf.
https://video.link/w/AbZXb
Print this template from Inner Child Fun to make an alien matching game for your child:
https://innerchildfun.com/2017/08/space-alien-matching-game-free-printable.html

Fly Guy and the Alienzz
• Written and illustrated by Tedd Arnold
• Published by Cartwheel Books
• Presented by James Boger
Buzz makes a movie – Fly Guy and Buzz Boy are captured by space aliens!
https://video.link/w/icZXb
The Aliens from Disney’s Toy Story look similar to the aliens in this book. You can find instructions to make them here:
https://family.disney.com/craft/toy-story-green-alien-papercraft/

Friends on the Moon
(tune: The Itsy-Bitsy Spider)

Climb aboard the spaceship, we’re going to the moon (wave your arm, “Come on”)
Hurry and get ready, we’re going to blast off soon
Put on your helmet and buckle up real tight (pretend to put on helmet and seat belt)
‘Cos here comes the countdown, so count with all your might.

We’re landing the spaceship, ‘cos now we’re on the moon (sit down on floor)
Get your gear together, we’re going to head out soon
We’re so excited, I wonder what we’ll find (shrug shoulders)
If we see some aliens, we hope they will be kind.

(speak)
Do you see any? Look around – over there! (look all around)

We see some aliens, they’re coming to us now
To show we are friendly, we wave to them and bow (wave hello and bow)
“Hello”, they say, and we say, “Hello,” too
“We have come from Earth and we want to play with you.”

(speak)
You want to play, too? Hooray! (clap hands)

Playing with aliens, a silly jumping game (jump up and down)
Bouncing so high and coming down again
Taking a photo with our friends on the moon (pretend to take a selfie)
It’s time to leave now, but we will visit soon.
(speak)
Bye-bye! (wave good-bye)